The first two photos below show scenes from Aeromarine's operating base at Atlantic City, N.J., in the summer of 1920. 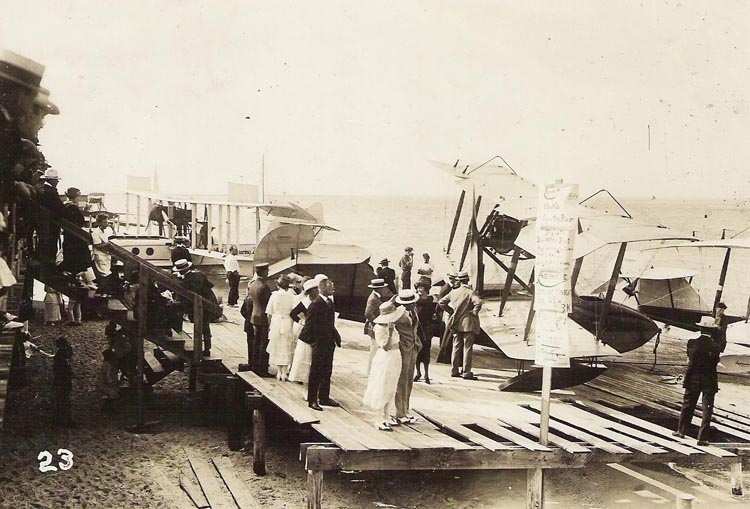 Dressed up for a pleasure flight.
The Aeromarine Model 75 flying boat in the background is the soon to be rechristened Santa Maria.
In the foreground are two Model 40s.
(Photo courtesy of Robert Fraser Farnsworth)
Click for larger view 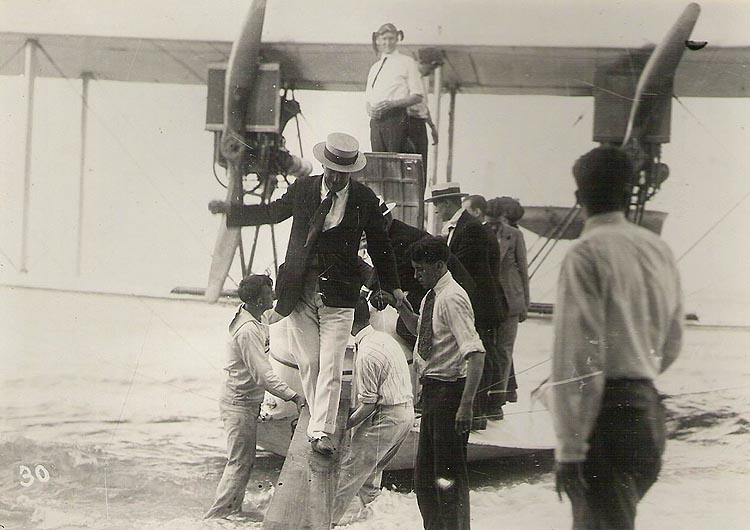 You had to have a good sense of balance to be a passenger of Aeromarine Sightseeing and Navigation Company!
Plane is again the Santa Maria.
(Photo courtesy of Robert Fraser Farnsworth) 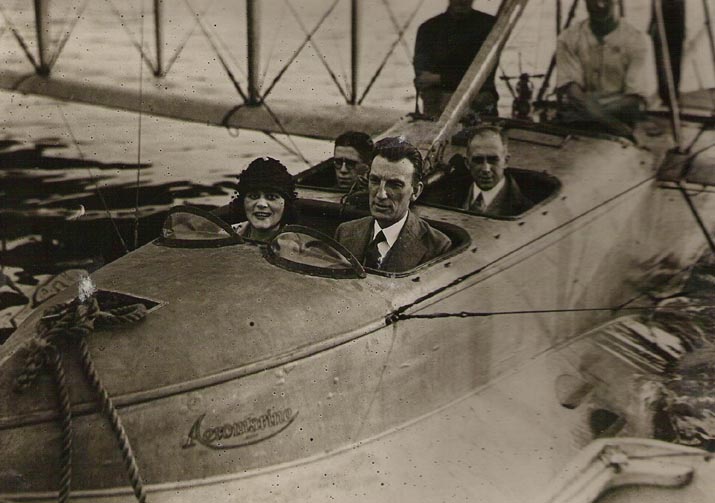 An Aeromarine Model 85 with Aeromarine President Charles F. Redden and his son in the second row.
The photo dates to the spring of 1921.
(Photo courtesy of Robert Fraser Farnsworth)
Click for larger view (detail) 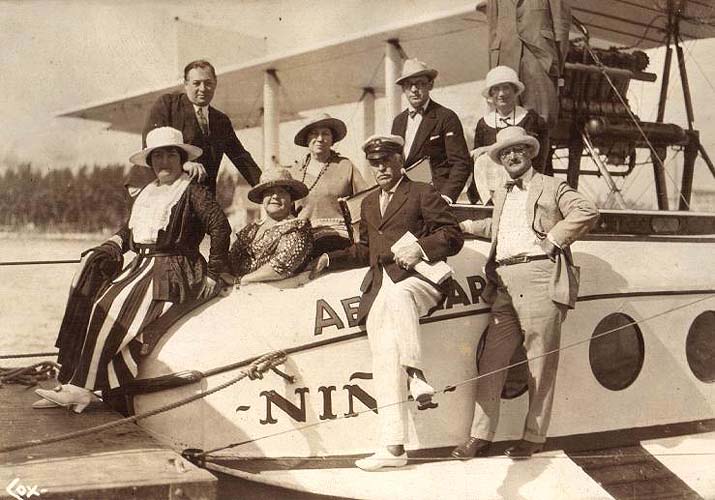 The E.M. Statler Party photographed at Miami in connection with a trip to Havana in the Aeromarine Model 75 Niña in the spring of 1922.
The famous hotelier is the man in the white yachting cap.
The Forgotten Detroit website has pages on the Statler Hotel, including a brief biography of the hotel chain's founder, E.M. Statler. 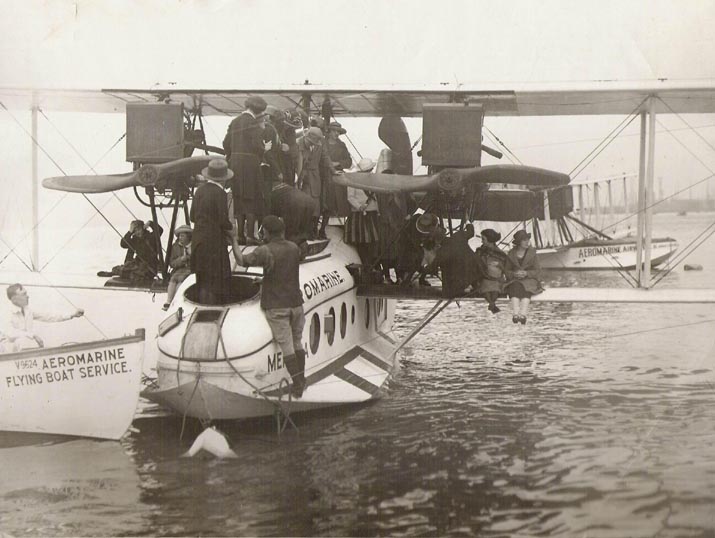 In May 1922, the Aeromarine Model 75 Mendoza made a record flight with 27 people, of which 24 were flappers.
It is seen here at the Columbia Yacht Club in New York City being prepared for the official photo of the occasion.
The full story can be read on Photos of Aeromarine aircraft - page 2.
(Photo courtesy of Robert Fraser Farnsworth)
Click for larger view 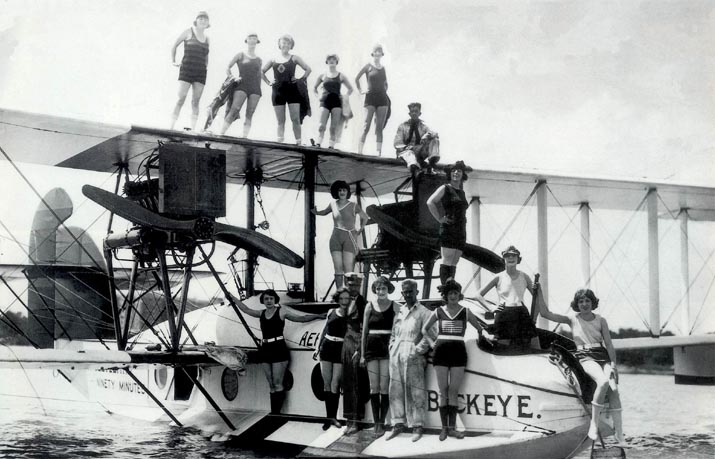 Even more flappers gracing a Model 75, this time the Buckeye in Florida in the spring of 1922.
(Photo courtesy of Geoffrey Arend; from his book "Great Airports: Miami International", 1986)
Click for larger view 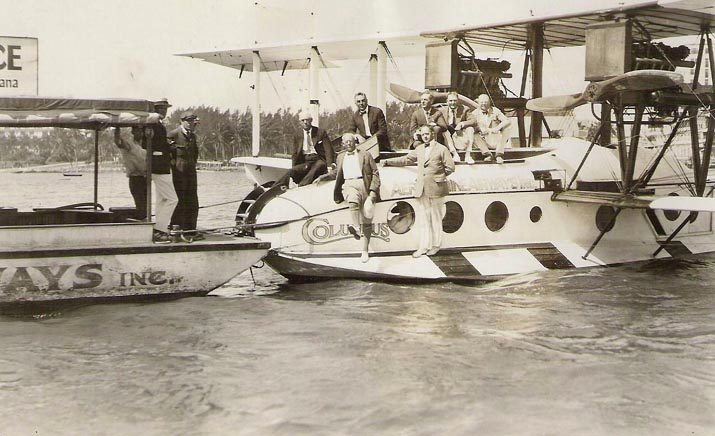 Dr. James W. Inches, Police Commissioner of Detroit, and other prominent Detroiters,
ready to leave Miami for a trip to Nassau on the Aeromarine Model 75 Columbus.
The photo probably dates to the autumn of 1922.
(Photo courtesy of Robert Fraser Farnsworth)
Click for larger view 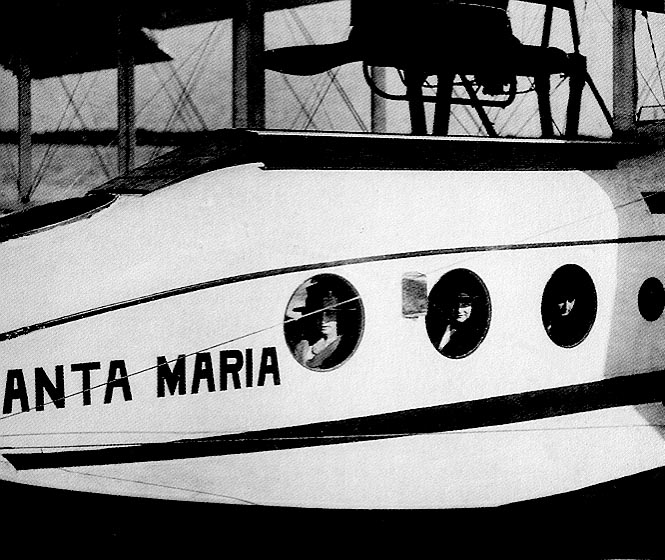 This photo of the Santa Maria clearly shows the excellent view the large windows offered to Aeromarine passengers.
See the panorama views on Views from Aeromarine aircraft page for examples of this.
(Photo from the "U.S. Air Service", May 1922) 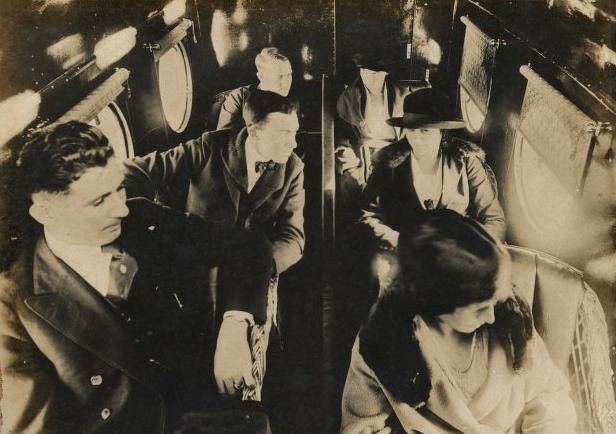 The interior of the front passenger cabin of an Aeromarine Model 75, looking from the bow hatch to the mid cockpit section.
Passengers enjoyed pull down window shades and wicker and leather chairs. Note the equal division between male and female passengers.
More often than not, Aeromarine enjoyed a slightly higher female pasenger base than male.
See the Aeromarine timetable (winter 1921-22) for a clear view of the interior of the front cabin.
(You can actually see the features a bit better on a photocopy of the same photo from the "Aerial Age Weekly" of November 8, 1920) 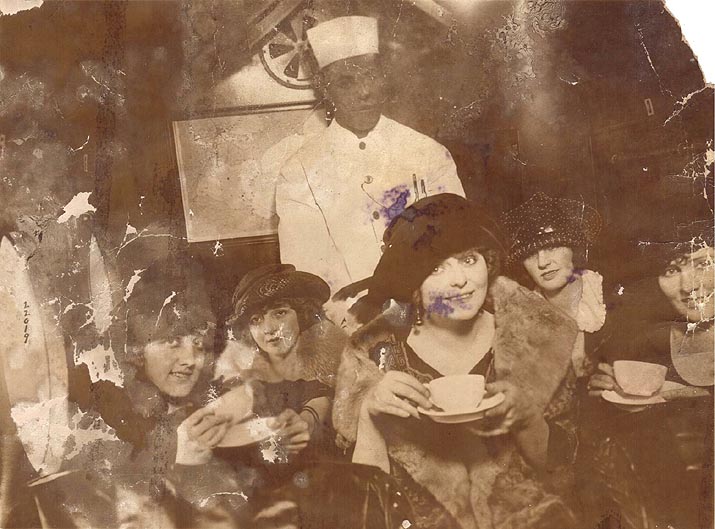 An aerial tea party for the Society Page writers of the Cleveland newspapers over Cleveland in the summer of 1922.
This was another of Harry Bruno's marketing schemes.
The photo was taken in the front cabin of a Model 75 looking from the bow hatch to the mid cockpit section.
The waiter is standing by the wall dividing the cabin from the cockpit section.
The map on the wall shows Aeromarine's operations in the Lake Erie area. 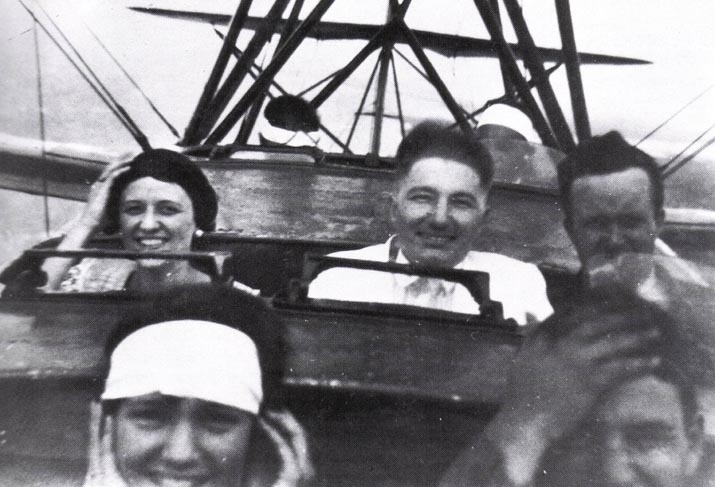 Passengers enjoying a flight in an Aeromarine AMC flying boat somewhere in Florida in the autumn of 1923.
(Photo courtesy of Geoffrey Arend; from his book "Great Airports: Miami International", 1986)

See also a photo of the Mendoza with a full load of passengers on Photos of Aeromarine aircraft - page 2
and
Flying with Aeromarine - A passenger narrative,
a page detailing a passenger's experience of a trip between Detroit and Cleveland in the summer of 1922.