Photos of aircraft on this page: 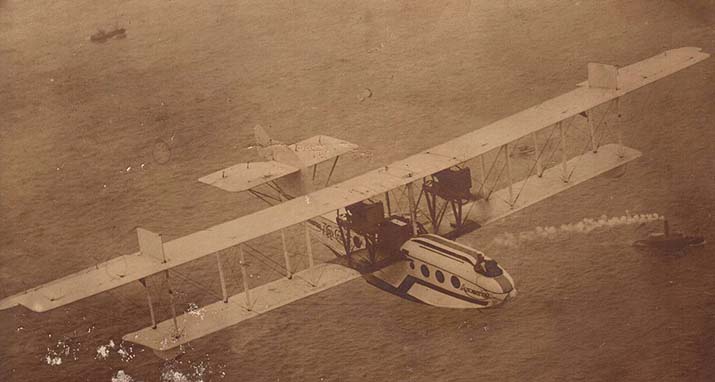 The Santa Maria before formal christening of October 1920. The photo dates to the summer of 1920 over NYC harbour. 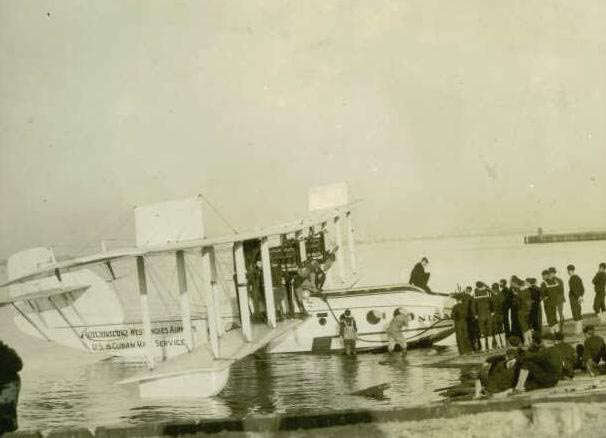 The Niña in Aeromarine West Indies Airways colours being refuelled by US Navy personnel at Hampton Rhodes, VA, in November 1920.
(Photo courtesy of Robert Fraser Farnsworth) 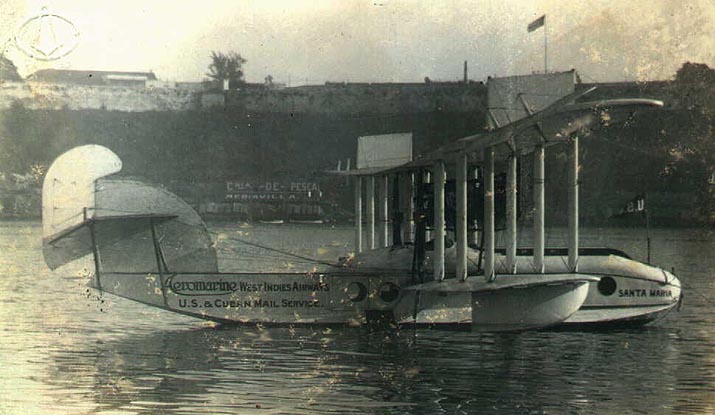 The Santa Maria in late 1920 or early 1921 in Havana Harbour, seen against the ramparts of the Fortaleza de la Cabaña.
(Photo courtesy of Luis González) 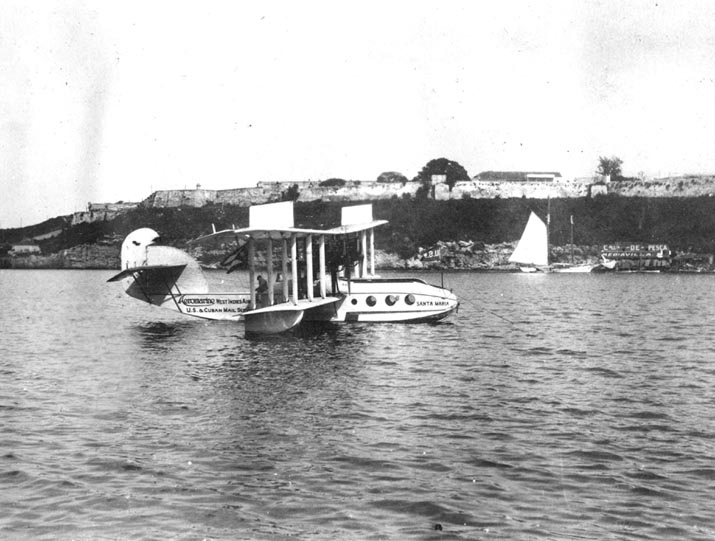 Another, though brighter, view of the Santa Maria in Havana Harbour, again seen against the ramparts of the Fortaleza de la Cabaña.
It may well be that both this and the photo immediately above are from Aeromarine's inaugural service of November 1, 1920.
The USM (United States Mail) pennant flying in the bow hatch is not known to have been used
other than during special occasions during the earliest days of the airline.
(Photo taken by Joseph Buck, US Consul to Cuba; courtesy of Chris Edwards)
Click for larger view (detail) 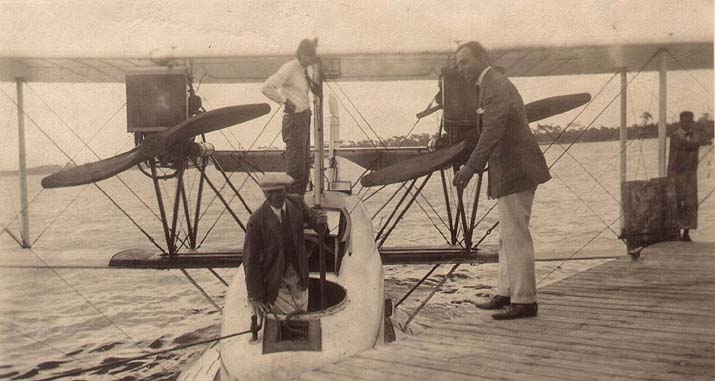 Photo dating to the days of Aeromarine West Indies Airways, taken from the looks of it in Florida, possibly at Key West.
The aircraft is an unidentified Model 75.
The man smiling on the dock is Edwin Musick, later legendary Chief Pilot of Pan American, but then an Aeromarine pilot.
The tall person standing in the background in white is Aeromarine's Chief Test Pilot, Cyrus J. Zimmermann
(brother of Chief Engineer Paul G. Zimmermann).
Click for larger view (detail) 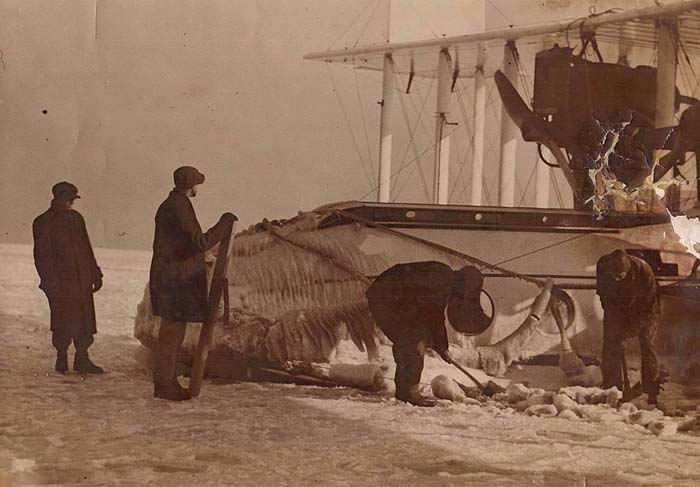 The Ponce de Léon at Keyport in January of 1921, where the pilot tried to land the plane on the frozen Raritan Bay.
The aircraft got stuck, and ultimately had to be dynamited out, but amazingly, the plane was in Key West within a month. 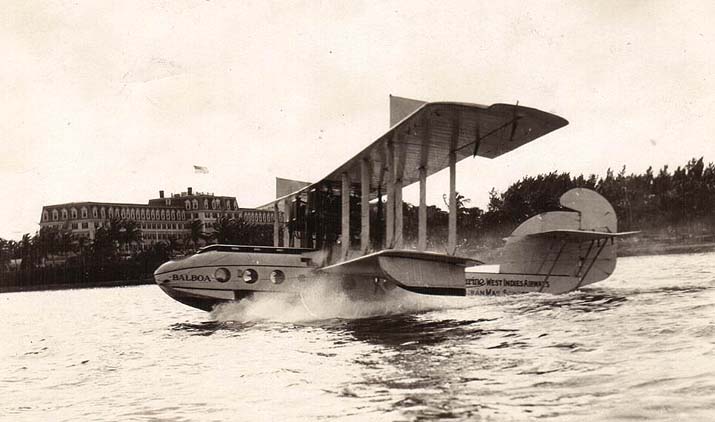 The Balboa in front of Flagler's Royal Palm Hotel in Miami on Biscayne Bay in February of 1921,
where today the skyscrapers of Miami would be in the background.
Click for larger view (detail) 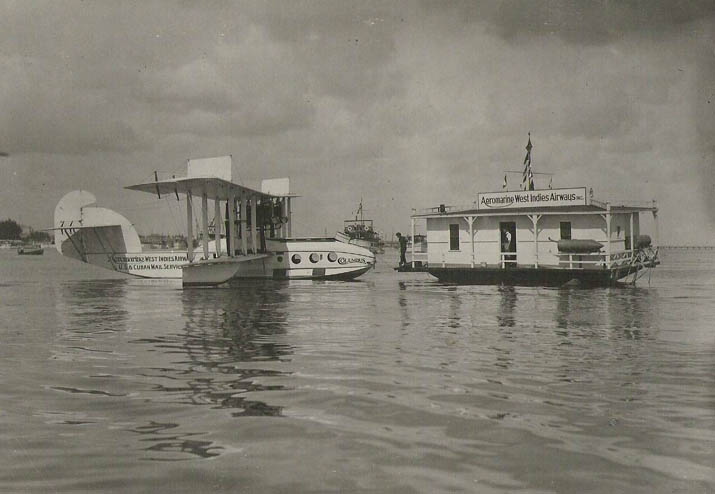 The Columbus tied up to the Aeromarine Airport pier at Miami on Biscayne Bay, probably early in 1921.
(Photo courtesy of Robert Fraser Farnsworth)
Click for larger view 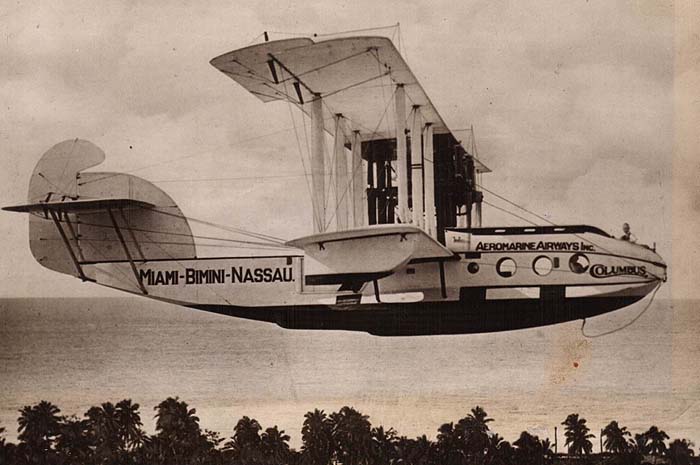 The Columbus flying over Bimini in the Bahamas in late 1921. 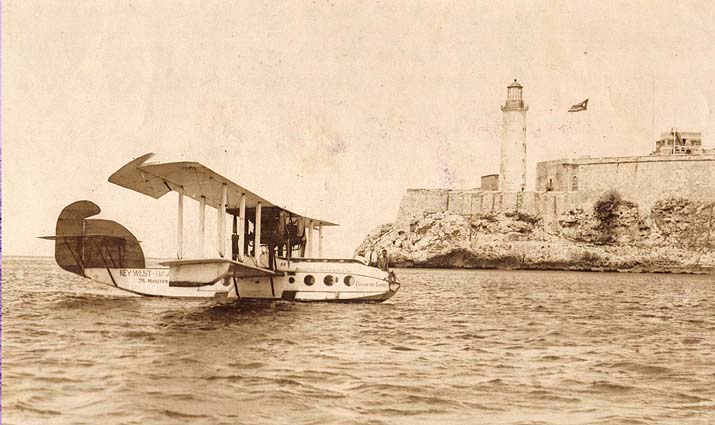 The Ponce de Léon in front of Morro Castle in the harbour of Havana in 1922.
Click for larger view (detail) 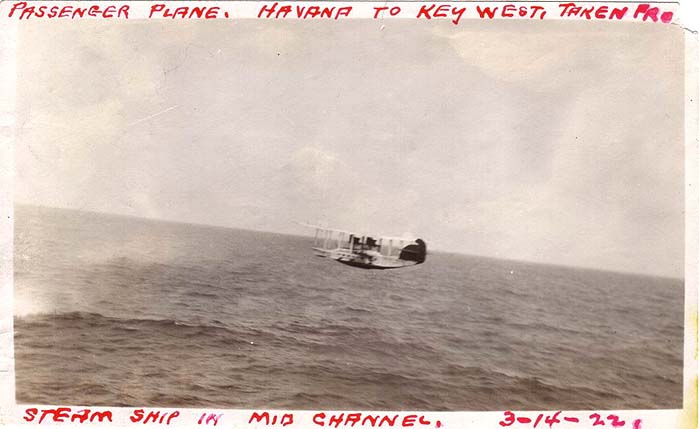 Photo taken from a passing ferry between Key West and Havana, March 1922. 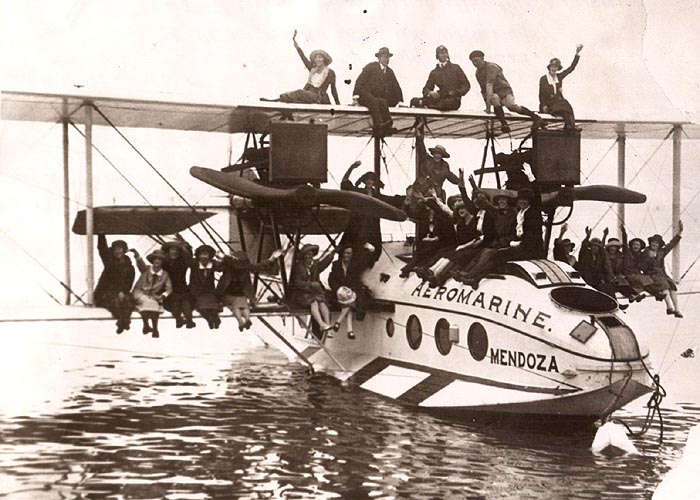 The Mendoza in May 1922 on the occasion of the record flight with 27 people of which 24 were young women, referred to as flappers in those days.
The man in the hat sitting on the upper wing is Aeromarine's Chairman Inglis M. Uppercu and right next to him is the pilot, Cyrus J. Zimmermann.
The photo was taken at the Columbia Yacht Club on the Hudson River, New York City, at the opening of the terminal at Aeromarine's airport.
A shot of the preparations for this photo is on the Photos of Aeromarine passengers and passenger accomodations page
(which also has another photo of a flying boat full of flappers, this time the Buckeye).
The following is a quote from the "Aeronautical Digest" magazine of August 1922:
"The 400 horsepower engines of the Mendoza, one of the de luxe commercial flying vessels of this (Aeromarine) fleet,
lifted into the air at Keyport, N.J., the largest flapper cargo ever transported by air,
and just 21 minutes later delivered the young women as a fitting bouquet of the inauguration of the airport
which the company has established at the Hudson River and 82nd Street.
There were 24 flappers by the official account in addition to Inglis M. Uppercu, Pilot Zimmermann and a mechanician.
The fact that they were flappers only added interest to the company's announcement
which was megaphoned to thousands lined along the waterfront at the airport,
this was a record number of passengers for any flying boat in commercial use in America."
(Photo courtesy of the Keyport Historical Society, Keyport, N.J.)
Click for larger view 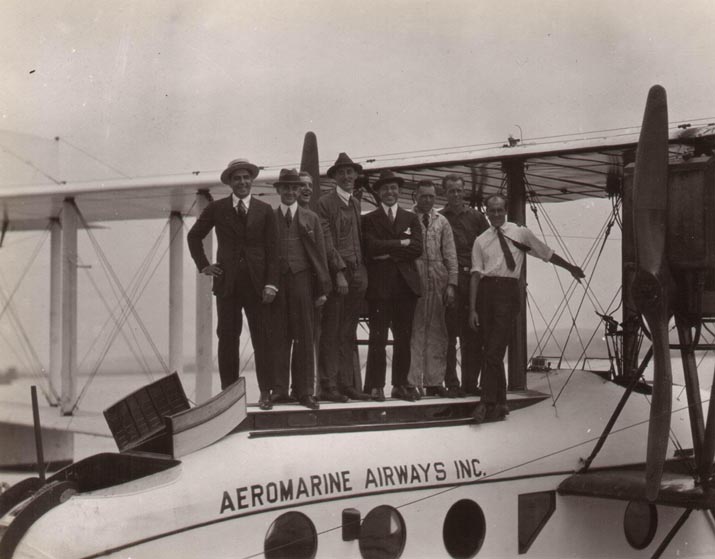 The Wolverine and Santa Maria at anchor at Cleveland after inaugurating the Detroit-Cleveland passenger service on July 14, 1922.
(The Aeromarine baggage labels page has a photo of the Welcoming Commitee in Cleveland.)
(Photo from the "Aviation" magazine of July 24, 1922)
Click for larger view 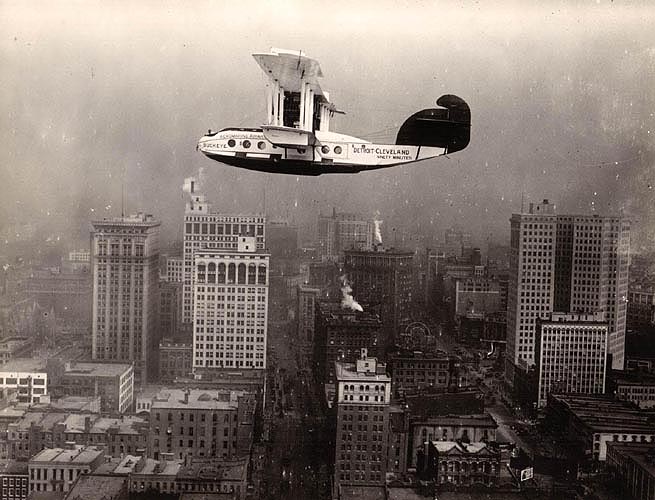 The Buckeye in flight over Detroit, Michigan, in the summer of 1922.
(Photo courtesy of the Keyport Historical Society, Keyport, N.J.)
Click for larger view (detail)
See Flying with Aeromarine - A passenger narrative for an account of a passenger's experiences of a trip between Detroit and Cleveland in 1922. 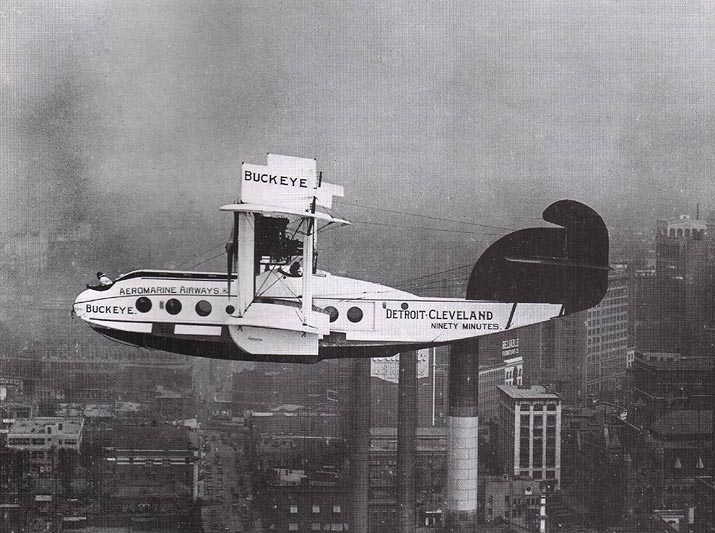 The Buckeye in flight over Cleveland, Ohio, in the summer of 1922.
(Photo courtesy of David Ostrowski)
Click for larger view (detail) 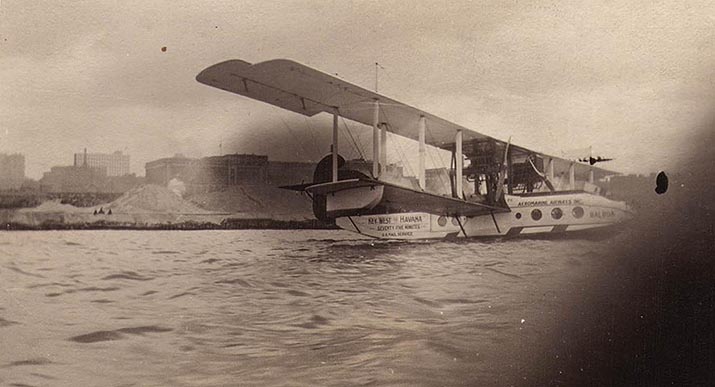 The Balboa at Cleveland, Ohio, in the summer of 1922.
An interesting perspective: a passenger's view of the plane when approaching in a boat.
Click for larger view 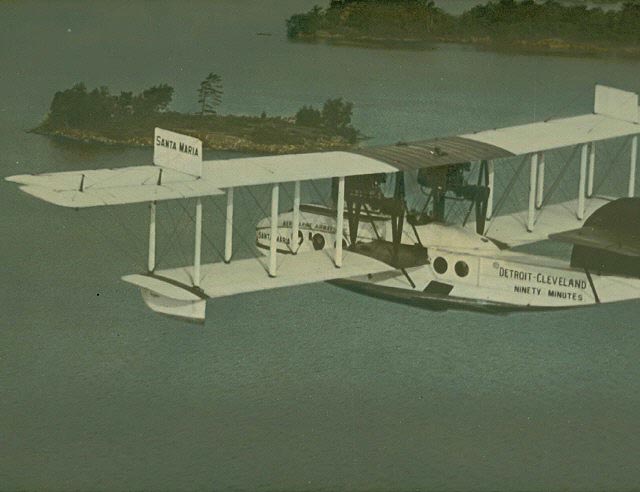 The Santa Maria in the summer of 1922, flying over the Thousand Islands, N.Y.
(Photo courtesy of Robert Fraser Farnsworth) 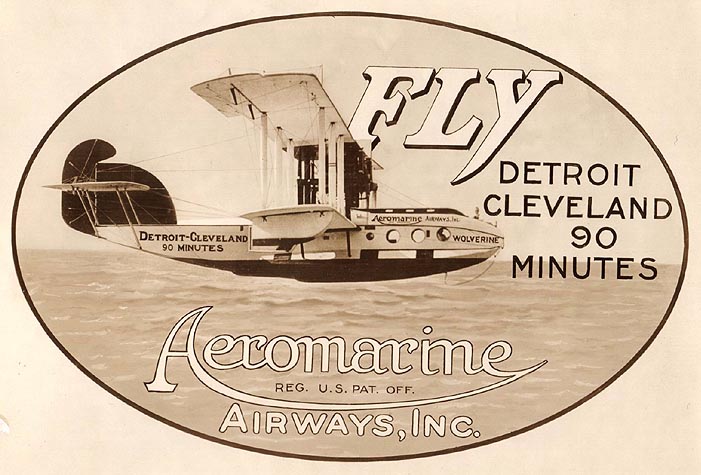 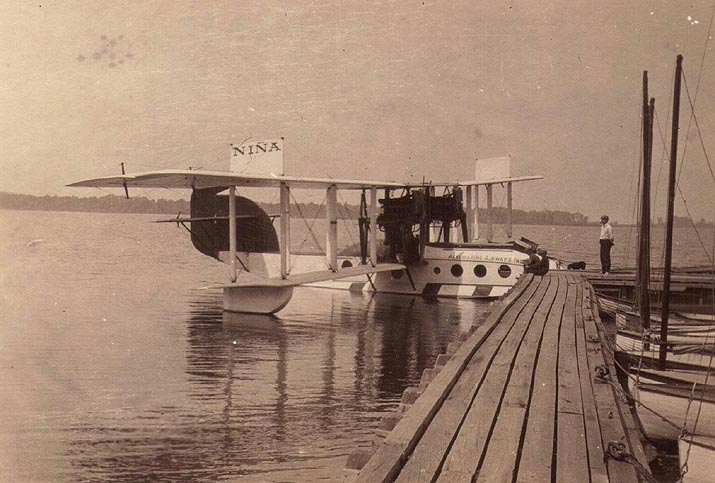 The Niña in 1922 or 1923.
(Photo courtesy of the Keyport Historical Society, Keyport, N.J.)
Click for larger view (detail) 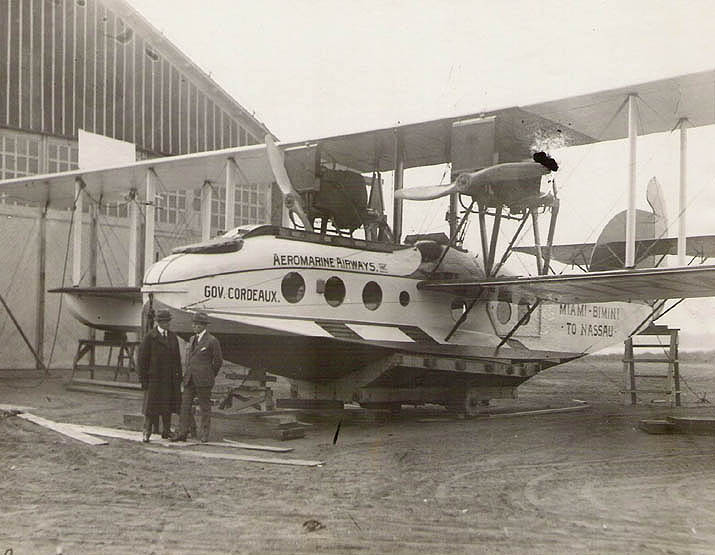 This photo of the Gov. Cordeaux resting in front of the Aeromarine Plane and Motor Company factory at Keyport, N.J., dates to early 1923.
The two men are Charles F. Redden and Inglis M. Uppercu, President and Chairman of Aeromarine respectively.
(Photo courtesy of Robert Fraser Farnsworth)
Click for larger view

A beautiful scale model of the Wolverine made by David Miller in 2007-08
can be found in the Scale Model Articles section of the Seawings website.